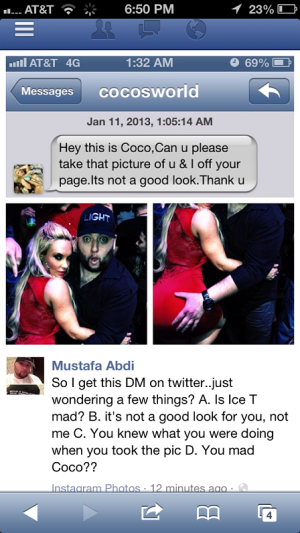 As the pictures with rapper AP.9 came out a while ago on TMZ of him and Coco being extra friendly on mutliple nights out in town of Las Vegas, Ice T and Coco have been going back and forth attempting to keep their marriage together and prove to the public everything is fine. Now the Reality and Peepshow star is attempting to put out yet another fire with ANOTHER man. See picture above as she DM’ed (private messaged) Mustafa Abdi aka Moose Diesel asking him to take down their pictures they took a couple months ago that no one seemed to have noticed. The picture was taken inside Haze Nightclub where Moose was the Director of Marketing there, but now the Director of Marketing for the new nightclub going up in a few months inside Mandalay Bay called, Light Nightclub. Was Coco and Moose’s picture harmless? I’d say so, but not a good look for her as she’s married. He’s doing what any man would do if a beautiful woman allowed this behavior.